Preventing underage marijuana use: What we can learn from tobacco prevention funding

"Fifteen years after tobacco companies agreed to pay billions of dollars in fines in what is still the largest civil litigation settlement in U.S. history, it's unclear how state governments are using much of that money," according to a recent NPR story.

The story goes on to report about what happened to tobacco settlement funds that were supposed to go toward tobacco prevention programs.  For instance in Mississippi, "What happened as the years went by, legislators come and go, and governors come and go . . . so we got a new governor and he had a new opinion about the tobacco trust fund . . . So a trust fund that should have $2.5 billion in it now doesn't have much at all . . ."

"And it's not just Mississippi . . . all across the country hundreds of millions of dollars have gone to states, and the state have made choices not to spend money on public health and tobacco prevention."

Tobacco funding in Washington
Washington State is no different.  As the following chart from the Campaign for Tobacco-Free Kids shows, only a fraction of the total state tobacco revenue -- from the Tobacco Settlement agreement and tobacco taxes -- is spent on prevention. 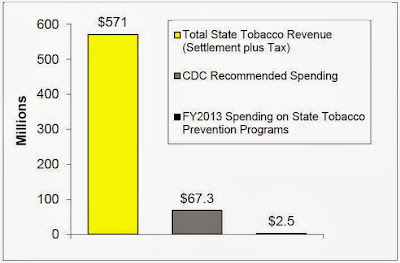 From the Campaign for Tobacco-Free Kids:

Historically, Washington funded tobacco prevention largely through the Tobacco Prevention and Control Account, which included a portion of the revenue raised by a 2001 voter-approved 60 cent per pack cigarette tax increase. The ballot initiative dedicated the new revenue to the state’s Basic Health Plan, to tobacco prevention and cessation, and other existing programs that were already funded with tobacco tax revenue. The initiative required the state to spend at least $26.24 million a year on tobacco prevention and cessation beginning July 1, 2002.  In the 2009 legislative session, the Washington State Legislature changed this law and diverted tobacco tax money to the general fund.

Marijuana revenue: Will history repeat?
Last week, I blogged about how our state plans to spend marijuana revenue dedicated for teen drug abuse prevention.  However, there is no guarantee that these funds will not be diverted to the state's general fund in a few years.  Though influential people and lawmakers currently say that underage marijuana prevention is essential for making our new marijuana system work, especially considering the U.S. Department of Justices guidelines, there is nothing preventing a reversal of course in a few years.

With the elimination of our state's Community Mobilization program, it's clear that the legislature does not prioritize teen drug abuse prevention even if the availability of the second most commonly used drug among teens is about to increase significantly.
Posted by Inga Manskopf at 8:19 AM