A story appearing on KOMO News today starts by saying:

One year ago Tuesday marks a tragic anniversary for a Seattle family.

It's the day their lives changed forever at the hands of a drunk driver. The Seattle father who lost part of his family and now wants to do everything to protect yours.

"I hope our story will remind people how bad it can be, help people change their minds," said Dan Schulte.

If Mark Mullan had changed his mind, and chosen not to drive drunk one year ago, Schulte's parents would be alive.

This tragedy happened in our community and it could have been prevented.  Preventing underage drinking is one way to prevent not only teenagers from driving under the influence but can prevent adult alcohol abuse which sometimes leads to drunk driving.

Parents play an important role in preventing teen drug, including alcohol, use.  Teenagers look to their parents for guidance, even when parents no longer think they do.  Learn more from Dr. Leslie Walker, Chief of Adolescent Medicine at Seattle Children's Hospital:

Posted by Inga Manskopf at 5:34 AM No comments:

A town hall meeting for parents:
A discussion on why, when and how to talk to your kids about drugs and alcohol!


Enjoy food, beverages, and prizes!  Leave with strategies and publications from students and MADD .

Discussion will be run by high school students for parents/guardians or anyone with a teenager in their life.
Posted by Inga Manskopf at 11:32 AM No comments:

Next week is Safe Roads Awareness Week in NE Seattle.  It will kick off with a walk and rally in memory of Dennis and Judy Schulte who were killed by a drunk driver near Eckstein Middle School last year.

In fact, more than 20% of NE Seattle high school seniors report riding in a car with a driver who has been drinking, according to the 2012 Healthy Youth Survey.  This is an increase from 2010.

It is important for parents to model safe behaviors.  Learn more from Dr. Leslie Walker, Chief of Adolescent Medicine at Seattle Children's Hospital.

Parents can learn more through three community events taking place over the next week.

Why an increase in teen drug use in NE Seattle? (Updated)

With the latest media attention, questions are being asked about how Roosevelt High School compares to other schools and why more students are attending school under the influence.

First, it is not just Roosevelt.  Other high schools are reporting an increase in students using/possessing marijuana and alcohol at school.  The difference is that Roosevelt High School administration decided to inform the public since teen drug use is a community problem.

Update: KPLU broadcast a story about an increase in marijuana use on middle and high school campuses throughout Seattle.

However, RHS students increasingly report recent drug use (despite alcohol use rates decreasing between 2006 and 2010). 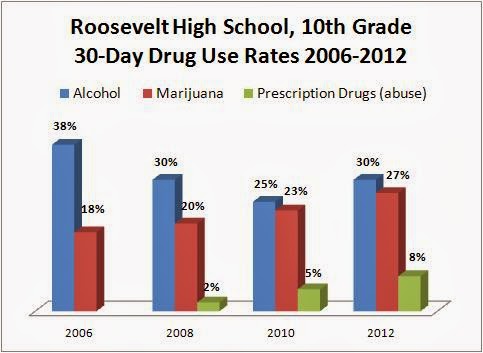 Why are substance use rates increasing in NE Seattle?

First the good news: Parental monitoring
Since 2006, the Prevention WINS coalition and community members focused a great deal of prevention activities on parenting.  Specifically, activities taught parents that they should monitor their teenage children to ensure that they are following family rules about not using drugs. According to HYS data, Eckstein 8th grade students* increasingly report that their parents monitor them.  Between 2006 and 2012, the percent of 8th grade student who reported that their parents know where they are and who they are with when they are not home increased from 73% to 92%.

The other not-so-good news: Community laws & norms
As reported in an earlier post, the percent of 8th grade student who perceive community laws and norms that are favorable to drug use increased between 2006 and 2012 from 15% to 26%.

Since risk factors have changed dramatically over the past few years, the Prevention WINS coalition is currently conducting a new assessment to determine how to shift focus onto community risk factors when the coalition has been focusing on family risk factors.  The assessment will be complete by the end of the school year.

------------
*Eckstein Middle School 8th grade data is used because former Eckstein students compose the largest group -- but not the majority -- within the Roosevelt freshman class.  Eighth grade risk factor data can also inform onset of use between middle and high school, an important transition time.
Posted by Inga Manskopf at 9:23 AM No comments:

Media stories highlight increased acceptance of drug use among teens

KING 5 and Q13 also picked up on the story about Roosevelt High School's principal's letter to parents about a spike in the number of students attending school in possession and/or under the influence of drugs.

The KING 5 story includes interviews with students who report that their peers who use are no longer afraid to show that they use marijuana and/or alcohol.  They say that there is increased acceptance that marijuana/alcohol use is "just part of life" and "the normal thing to do."

The Q13 story highlights the fact that the younger a teenager starts using drugs, including alcohol and marijuana, the more likely they will become addicted to them.

Update: KOMO also broadcast a story and highlighted that the majority of Roosevelt students make healthy choices and do not use drugs.
Posted by Inga Manskopf at 7:54 AM No comments:

Labels: under the influence at school, underage drinking, underage marijuana use

More about the increase in students under the influence at school

Today, KIRO broadcast a story about the increase in drug-related disciplinary incidents at Roosevelt High School.

Posted by Inga Manskopf at 2:58 PM No comments:

Labels: drug use at school, underage drinking, underage marijuana use

How to address an increase in students attending school under the influence of drugs?

On Wednesday, March 19, 7-8:30 p.m., Dr. Leslie Walker, Chief of Adolescent Medicine at Seattle Children’s Hospital, will provide parents with information about how marijuana, alcohol, and other drugs affect teen health and development and what parents can do support healthy teen decision-making.  This parent education forum will be held at Roosevelt High School, 1410 NE 66th Street.

The event is part of a multi-pronged approach to address an increase in Roosevelt High School student use of substances, particularly marijuana, during school hours.  According to a letter that was sent to families of RHS freshmen, this year the school is “experiencing an increase in students being under the influence and/or in possession of marijuana/alcohol at school or school related activities.  In fact, our discipline incidents with respect to marijuana/alcohol use are double what they were this time last year.”

Roosevelt High School is not unique.  Other Seattle high schools are reporting an increase in students attending school under the influence and an increase in the number of vaporizers confiscated.  (Vaporizers may be used to ingest THC or nicotine – both prohibited on school grounds.)  As noted in an earlier post, Seattle students attend school under the influence of drugs at rates higher than the King County and State averages.
Posted by Inga Manskopf at 8:49 AM No comments:

E-cigarettes used for more than nicotine

E-cigarettes have been in the news quite a bit, lately.


While most of the media coverage is about the use of e-cigarettes, a type of vaporizer, to ingest nicotine, it is becoming increasingly common for teen marijuana users to ingest the drug using vaporizers.  During the January Prevention WINS general coalition meeting, community members reported that vaporizers are increasingly confiscated at school and it is difficult for administrators to detect if they are being used for nicotine or THC (the part of marijuana that produces a high.)  Community members who work with NE Seattle teens report that those who use marijuana are increasingly using vaporizers with some people predicting that, for minors, smoking marijuana is becoming a thing of the past.

In the KOMO story about hash oil that was posted last week, a Liquor Control Board employee notes that vaporizing concentrated marijuana products seems to be preferred among teens who use.  Considering that people under 21 represent a quarter of current WA marijuana users, products that are consumed by vaporizing likely compose a large part of the marijuana product market. 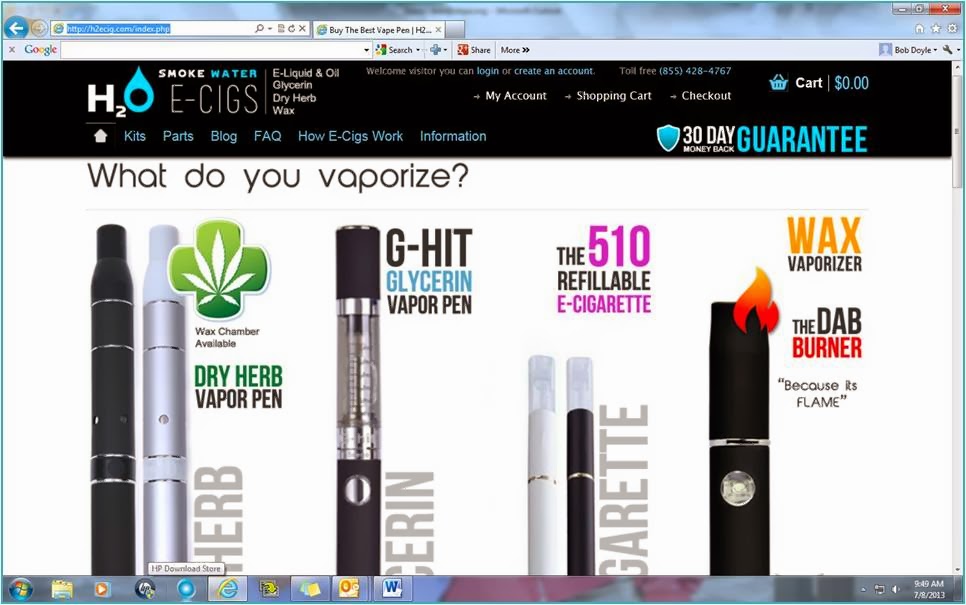 Posted by Inga Manskopf at 8:07 AM No comments: