Tonight!  All are welcome! 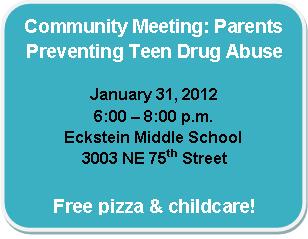 Posted by Inga Manskopf at 8:00 AM No comments:

KCTS 9 and InvestigateWest report on the alarming increase in prescription-drug abuse in Washington state, looking at doctors who overprescribe, the lack of regulation or treatment options, and how this epidemic is affecting teenagers, seniors and middle-class families.

In addition, several print and online stories on the topic were published this week.  They may be viewed via the Investigate West webpage.


Some of the questions were about the new social host law passed by the Mercer Island City Council.
Posted by Inga Manskopf at 7:52 AM 1 comment:

I often get questions about community coalitions, like Prevention WINS, and our role in preventing youth substance abuse.  An article appearing in a recent edition of Alcohol Research & Health (National Institute on Alcohol Abuse and Alcoholism) explains how communities engaged in preventing underage drinking are particularly effective.  Following are a few excerpts about what makes for a successful coalition from Engaging Communities to Prevent Underage Drinking:

Community-based efforts offer broad potential for achieving population-level reductions in alcohol misuse among youth and young adults.  A common feature of successful community strategies is reliance on local coalitions to select and fully implement preventive interventions that have been shown effective in changing factors that influence risk of you engaging in alcohol use . . .

Although coalitions are a common element of effective community-based prevention, not all coalition efforts have produced significant changes in alcohol use . . . The evaluations [of unsuccessful community efforts] indicated that . . . the mere presence of an active, well-intentioned coalition is not enough to prevent AOD [alcohol and other drugs] use.  In other words, simply gathering local stakeholders and asking them to collaborate to do their best to solve local drug problems or preventing underage drinking does not produce desired changes.

Instead, the evidence suggests that in order to be successful, coalitions must ensure the following:

~ They must have clearly defined, focused, and manageable goals;

~ They must have adequate planning time;

~ Prevention decisions must be based on empirical data about what needs to change in the community and on evidence from scientifically valid students of what has worked to address those needs;

~ They must implement prevention policies, practices, and programs that have been tested and shown to be effective; and

~ They must carefully monitor prevention activities to ensure implementation quality.
Posted by Inga Manskopf at 9:00 AM No comments:

Last year, the Prevention WINS coalition learned about the Take Back Your Meds campaign and how a statewide medicine return program would reduce youth prescription drug abuse.  Below is a clip from a local news story about why these programs are important.

During the current state legislative session, two bills are being considered that would establish a statewide system for the secure return of leftover prescription and over-the-counter medicines.  Following is a brief summary of SSB 5234 and HB 1370:

• Help stop the epidemic of abuse and poisonings, and protect our water quality.

• Requires no state funds; budget-neutral to the state. Primarily financed by all drug producers selling medicines in Washington, as part of doing business. Removes financial burden from Sheriffs, police, and local governments.

• Not a government-run program. Establishes the non-profit WA Medicine Return Association that will be managed and financed by drug producers so they can control their own funds and operate the program efficiently.

• Total annual costs of the program to drug producers collectively cannot exceed $2.5 million – or about 1 penny for every $16 in sales of medicines annually in Washington.

• Sheriffs, police, local govt’s, and pharmacies in 17 counties are operating take-back programs at limited locations, but are struggling for funding. Most WA communities cannot afford to start a take-back program.

• The federal Drug Enforcement Agency is coordinating some one-day take-back events; however these rely on local resources and will end in 2012 when the DEA finalizes new regulations for take-back of controlled drugs such as narcotics without involvement of law enforcement.

During the 2011 legislative session, the Senate bill was one vote short of being passed out of committee. Although many legislators support these bills, the powerful pharmaceutical lobby was successful in thwarting them.  More information about the proposed legislation may be found on the Take Back Your Meds website.
Posted by Inga Manskopf at 8:20 AM No comments:

In response to the plethora of alcohol advertising broadcast during the Super Bowl, the Drug-Free Action Alliance is once again providing communities with activities to counter-act their impact on teenagers.  Their Big Bowl Vote website includes a toolkit for youth groups and links to presentations about alcohol marketing and youth.

More information about alcohol marketing and youth is available on the Center on Alcohol Marketing & Youth website.
Posted by Inga Manskopf at 9:00 AM No comments:

The website also provides other information about the DFC program, eligibility, and the application process for this federal grant funding focused on community-wide environmental prevention strategies including coalition development. Applications are due March 22, 2012.
Posted by Inga Manskopf at 8:36 AM No comments:

Learn how to make 30-minute presentations about underage drinking prevention to parents using materials from MADD's Power of Parents, It's Your Influence campaign.

More information, including how to register, is available on the event flyer.
Posted by Inga Manskopf at 12:45 PM No comments: 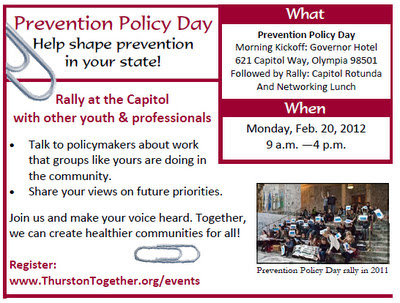 At this yearly event, youth and professionals gather together to rally at the Capitol in Olympia and meet with individual lawmakers in support of prevention policy. It is an opportunity to share views on future priorities relating to the health and safety of youth. In addition, youth leadership groups can talk about what is happening in local communities around the state.
*****
Agenda:
9:00am: Welcome and Event Kick-Off
12:00pm: Rally in the Capitol Rotunda
1:15pm - 2:30pm: Lunch (Networking and Youth Presentations)
2:30pm - 5:00pm: More Policy Maker Meetings
*****
All participants are strongly encouraged to set appointments with their policymakers at any point possible throughout the day. Ideal times for appointments are between 10:00am and 11:30am or 2:45pm and later.
Posted by Inga Manskopf at 8:50 AM No comments: 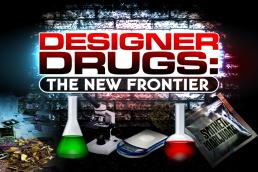 There’s a new and ever-changing class of drugs out there and their effects are unlike anything we have ever seen. Use of designer drugs like bath salts and spice is growing rapidly, even as laws and ordinances take effect to help control their spread.

CADCA will broadcast an hour-long program, Designer Drugs: The New Frontier, that will take a look at this new and emerging drug threat.  Viewers will hear from public health experts in Bangor, Maine where they say this is the worst drug epidemic they have ever seen. The show airs Jan. 26, 2012 at 10 a.m. live online at http://www.cadca.org/
Posted by Inga Manskopf at 8:32 AM No comments:

The Center for Alcohol Marketing & Youth (CAMY) at the Johns Hopkins Bloomberg School of Public Health have developed a 4-part YouTube video series that charts the marketing push into digital markets such as Facebook, YouTube, and Twitter.  Each video is only a few minutes long and well worth the time.

Posted by Inga Manskopf at 11:38 AM No comments:

6:30-8:00 Program
Hear about what is happening in our community from
• The Preventions, one of Eckstein’s student prevention clubs
• Eckstein and Nathan Hale staff

Find out what Eckstein students are learning about underage drinking and drug abuse prevention.

Get answers to your questions about underage drinking and teen drug abuse.

As part of their campaign to provide NE Seattle parents with information about how to help their teenage children make healthy choices, the Prevention WINS Social Marketing Workgroup today added a Parenting Tips & Tools page to the coalition's website.  In addition, a second postcard was mailed to all Eckstein Middle School families. 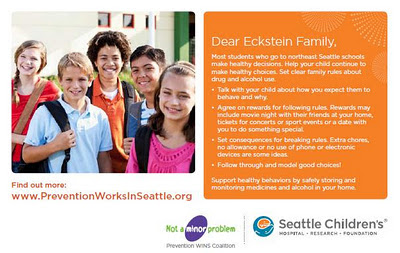 A postcard was sent to all Eckstein families in November and a third one will be mailed later this winter.

The campaign's goal is to increase parenting practices proven to prevent teen drug and alcohol use. Specifically, the campaign provides information about setting rules, consequences and rewards; communicating with other parents; and knowing their teen's friends.
Posted by Inga Manskopf at 12:53 PM No comments:

Next week, a committee of the commission which makes recommendations regarding conditions that qualify for medical marijuana, will consider adding Attention Deficit Disorder (ADD) and Obsessive Compulsive Disorder (OCD) to the list of qualifying conditions in our state.  A public hearing will be held:

Wednesday, January 11, 7:00 p.m.
Holiday Inn Seattle-Renton
One South Grady Way in Renton
Posted by Inga Manskopf at 8:41 AM No comments: