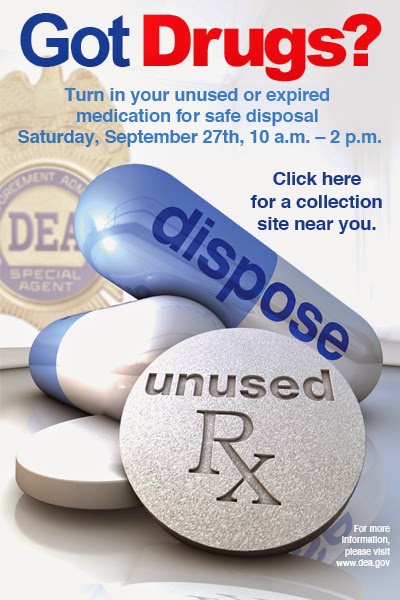 Clean out your medicine cabinet and safely dispose of medications:

To publicize the event, posters and flyers are available online.  Please consider spreading the word at your workplace and in your community.  One way to prevent teenagers from getting medications for abuse is to get rid of unused medications in the home.

Until King County is able to launch their secure medicine return policy, these semi-annual collection days are one of only a few ways to get rid of unused and unwanted medications with the least amount of harm to our local environment.  Some Group Health and Bartell pharmacies take back unused medications.

King County's program is on hold as a result of an agreement in a lawsuit challenging the regulations.  The lawsuit, filed by Pharmaceutical Research and Manufacturers of America and others, is similar to a lawsuit already underway against Alameda County in California.  The Alameda County lawsuit is currently under review by the federal 9th Circuit Court of Appeals and their decision is likely to affect the King County lawsuit.  King County agreed, therefore, to delay implementation until after the court's decision.
Posted by Inga Manskopf at 10:56 AM No comments:

Over the past week, a few posts focused on what coalitions can do to prevent teen medicine abuse.  Since I realize I may have put the cart before the horse, today's post will explain why preventing teen prescription painkiller abuse is important.

Prescription medicine abuse is the intentional use of a medication without a prescription; in a way other than as prescribed; or for the experience or feeling it causes.  According to the National Institutes on Drug Abuse, the medications most commonly abused are pain relievers/opioids.

Posted by Inga Manskopf at 9:40 AM No comments:

I share this last one as an example of how prevention campaigns are different depending on the local community.  The coalition profiled in the video below implemented prevention activities that are different from the coalitions profiled in the other videos.  The stories highlight that every community is going to have different responses to teen medicine abuse, and other teen drug abuse problems, depending on what their local data tell them, who is involved in the coalition, and the capacity of coalition members to do something.

Posted by Inga Manskopf at 8:10 AM No comments:

The information about blogging that Dr. Yolanda Evans from Seattle Children's Hospital shares in the following video can help people concerned about youth substance use understand how they can use social media for outreach and education.

Dr. Evans blogs at Teenology 101.
Posted by Inga Manskopf at 1:38 PM No comments:

Everyone has a role to play in preventing teen medicine abuse

On Wednesday, I blogged about the importance of a community response to teen medicine abuse.  Below is another example of how community members can incorporate prevention activities into their work as part of a multi-pronged coalition strategy.  The video highlights how prevention activities can be sustained when community partners take ownership of them.

Posted by Inga Manskopf at 5:55 AM No comments:

The abuse of prescription drugs among NE Seattle teenagers increased steadily over the past few years.

During the 2012-13 school year, Prevention WINS members advocated for the King County Board of Health to adopt a countywide medicine return program.  It was adopted in June 2013 but is not yet up and running because pharmaceutical companies are suing to stop it.  The program will be one way to reduce the amount of unused prescription medicines in homes and therefore reduce youth access to them.

Prevention WINS members also promote the twice-yearly national Prescription Drug Take-Back Day.  The next one is Saturday, September 27 from 10:00 a.m. to 2:00 p.m..  All Seattle Police Department precincts will accept unused medications.  Materials for promoting the day are available on the King County Take Back Your Meds website.

Since substance abuse prevention activities are most effective when multiple community sectors address specific local problems, coalitions can be especially important for reducing teen medicine abuse.  The following video tells the story of one community coalition that is using a variety of approaches, guided by local data, to prevent medicine abuse.

Prevention WINS will plan for additional prevention activities during the September 16 general meeting. Please contact coalition staff for more information.
Posted by Inga Manskopf at 8:26 AM No comments:

"Just say no" is old news

Recently, Colorado launched a media campaign with the goal of preventing teen marijuana use.  Called "Don't be a lab rat", the campaign seems to take a similar tact as the anti-tobacco "truth" campaign.  Response to the campaign seems to be mixed with some people comparing it to the ineffective "This is your brain on drugs" campaign from the 1980's.

Prevention science has evolved quite a bit over the past thirty years and we know that scare tactics about health impacts don't work for preventing teen drug use.  We also know what does work and most are programs and policies implemented at the community level.

Programs that work
Programs are usually activities, including school-based curricula, in which children and/or their parents participate that provide education and support for preventing teen drug use. The National Registry of Evidence Based Programs and Practices is an online database that provides an extensive list of programs that are proven to be effective.

If you take a look at them you will notice that the programs mostly teach social-emotional skills and parenting skills.  They provide basic information about drugs but as a science teacher I worked with once noted, the curricula don't necessarily fit into a science class.  They are filled with information about how to deal with social and emotional situations that may increase a teenager's likelihood for trying drugs.  They are filled with information to help parents support healthy decision-making among their children.  That's what works.

Community-based activities that work
Communities have a role to play in preventing teen drug use, too.  Policies that reduce availability, increase prices, and support the enforcement of laws are proven to reduce youth alcohol and tobacco use.  Community laws and norms that support healthy adolescent development amplify the messages that teens receive from programs and from their parents.

Examples of community-based prevention activities conducted by Prevention WINS include:

Of course, I would be remiss if I didn't write: community-based coalitions work.  Prevention WINS is such a coalition.  When individuals and organizations come together to identify risk factors specific to their community and implement programs and policies that address those risk factors, teen drug use rates drop.  In 2011, Prevention WINS celebrated a drop in NE Seattle underage drinking rates.

Despite what is prolifically reported through media, prevention efforts have not used scare tactics to prevent youth drug use for many years.  Instead, parents have been encouraged to talk with their children about avoiding drugs and making healthy decisions.  Middle school students have learned how to deal with social situations and emotions that may put them at risk for trying drugs.  Communities have been encouraged to adopt policies that prevent teen access to drugs and support healthy youth development.
Posted by Inga Manskopf at 8:35 AM No comments:

The first marijuana-infused foods to hit stores will be . . .

Posted by Inga Manskopf at 12:00 PM No comments: 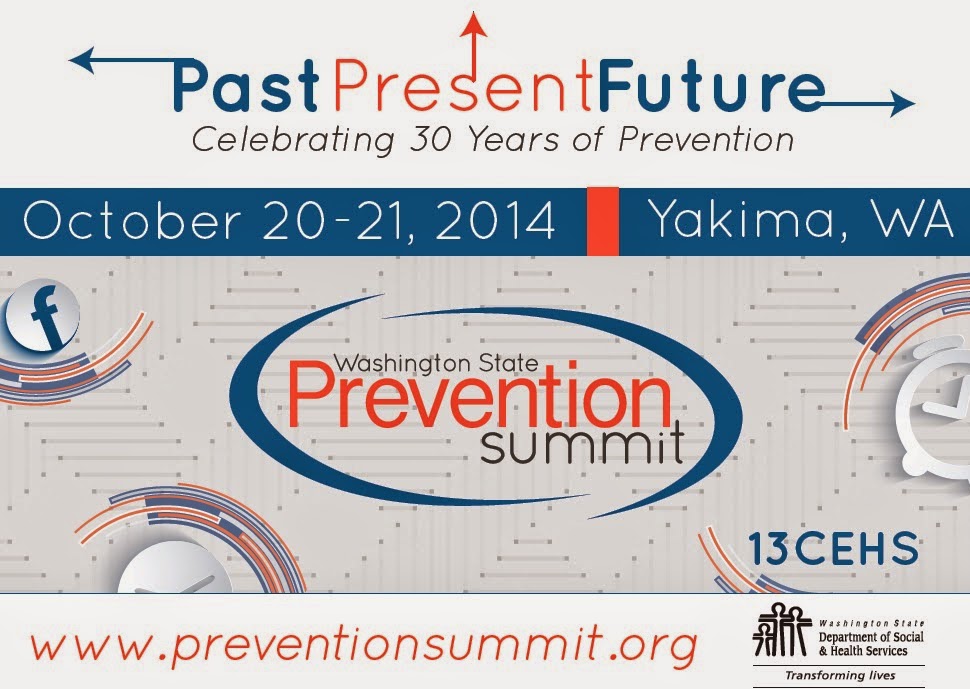 Convening since the 1980’s, initial conferences were held at Central Washington University in Ellensburg. The conferences were known as “family focus” meetings and soon became known as the annual “Building a Vision” conference.  In 1999, the conference began to be called the Washington State Prevention Summit.  It is the one time during the year when people working to prevent substance abuse, violence, and other destructive behaviors come together, reflect on the past year’s successes, learn new strategies, and network.  People who participate in the Summit include parents, children, teachers, law enforcement officials, prevention professionals, treatment providers, policy makers, college faculty, students, and dedicated volunteers who are all interested in preventing alcohol, tobacco and other drug abuse in Washington.