To follow up with an earlier entry about King County youth substance abuse treatment trends . . .

Not only does this information point toward the need for effective prevention programs among youth, it points to the importance of including youth substance abuse prevention in our conversations about marijuana decriminalization and legalization. Especially considering that the primary way that youth access needed substance abuse treatment is through the juvenile justice system. Our conversations should include how we, as a community, can prevent youth substance abuse and provide youth with access to treatment before they are in trouble with the law.
Posted by Inga Manskopf at 8:05 AM No comments:

-- Children of parents who helped with homework are less likely to use illicit drugs.

-- Children whose parents engage in monitoring behaviors are less likely to use alcohol.

More information about parental monitoring skills is available at Parents: The Anti-Drug.
Posted by Inga Manskopf at 8:44 AM No comments:

The Community Anti-Drug Coalitions of America (CADCA) is hosting a free online broadcast about how coalitions are trying to reach parents in non-traditional ways.

"Until several months ago, the apero was the bastion of civilised Gallic routine: a delicate early evening staple cherished as much by families in la France profonde as by the chattering classes of Paris.

That was before the noisy arrival of the apero geant -- giant aperitif -- a new phenomenon that is sweeping France, raising fears that the genteel pastime is being hijacked by binge-drinking revellers."

"Uppermost in the concerns of the French authorities is the spread of binge drinking among the younger generation. As more and more of its adolescents report getting drunk regularly, the nation that used to pride itself on its leisurely consumption has been forced to admit it too has a problem."
Posted by Inga Manskopf at 8:28 AM 1 comment:

Up to three initiatives that concern the privatization of liquor sales may appear on the November ballot in Washington. If approved, the initiatives would be a significant set-back for substance abuse prevention efforts in our state. Liquor control is a proven "environmental strategy" for preventing underage drinking.

Here are a few talking points about why state-run liquor stores are good for preventing underage drinking:

The Washington State Liquor Control Board's 94% no-sale-to-minors compliance rate is the highest in the nation. The private-sector compliance rate for alcohol sales is much lower, with rates ranging from 76%-84%.

States with retail monopolies have a lower prevalence of drinking and binge drinking among people between 12 and 25 years old.

Because state-run stores are state property, states can more easily regulate the on-site marketing of alcoholic beverages, including the promotion of products within the stores the display of exterior advertising for alcoholic beverages.

The Washington Association for Substance Abuse & Violence Prevention (WASAVP) is working to prevent these initiatives from being approved by voters this fall. WASAVP is a volunteer-run organization and is always looking for new members to support its mission to unite prevention advocates.
Posted by Inga Manskopf at 8:16 AM No comments:

This is a community event and everyone is welcome!
Posted by Inga Manskopf at 8:50 AM No comments:

Prevention WINS is conducting a survey of northeast Seattle parents about underage drinking and youth marijuana use in our community. If you are a parent of a child in grades K-12 in NE Seattle, please take few minutes to take the survey!
While all Seattle parents are welcome to take the survey, the coalition is targeting NE Seattle parents since the survey results will help us develop prevention strategies for NE Seattle families. Prevention WINS has funding to serve NE Seattle due to the high underage drinking rates in our community's high schools. Coalitions in other areas of the city are addressing youth substance abuse in West, South, and Central Seattle.
Some parents who have taken the survey have voiced concerns about questions asking about what they think other parents in our community do when it comes to preventing substance abuse among their children. One of the reasons this survey is being conducted is to assess social norms among parents in NE Seattle. The questions in the survey are asked specifically for that purpose.
Perceptions of others' behaviors about, for example, parenting practices and attitudes toward the risk of using marijuana, have a significant effect on and individuals own behavior. If the survey results indicate a discrepancy between parenting behaviors and perceptions of parenting behavioral norms in our community, the coalition may use that information to develop a social norms marketing campaign.
Posted by Inga Manskopf at 8:28 AM No comments:

Nearly all high school juniors and seniors believe their peers are more likely to drink and drive on prom and graduation nights according to the Center for Substance Abuse Research. Despite this perception, students do not think driving on these nights is dangerous. 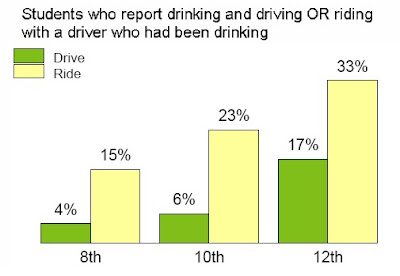