The Washington Association for Substance Abuse and Violence Prevention (WASAVP) has posted a Marijuana Education Toolkit to its website to support the work of substance abuse prevention advocates across Washington State.

The marijuana debate is in full swing in Washington. More and more substance abuse prevention advocates are finding themselves in the position of providing education and refuting misperceptions regarding marijuana policy. In response, WASAVP has posted a collection of documents for prevention advocates to freely use and modify to meet the specific needs of their communities. This toolkit is available on the newly re-designed WASAVP website.

Posted by Inga Manskopf at 8:14 AM No comments:

CADCA provides many free resource for community coalitions.  One of them is a one-hour broadcast that may be viewed on demand: Understanding Your Influence.

Coalition members can have far-reaching influence in their communities. Working to change laws, regulations, ordinances, and policies is frequently involved.  Policy change is often the fastest way to see population-level impacts and enhance drug-free environments for youth and families.

During the webcast, participants will learn:

Posted by Inga Manskopf at 12:39 PM No comments:

Last week, the Surgeon General was in town and participated in a Town Hall Meeting on youth tobacco use.  She shared a fact sheet about Preventing Tobacco Use Among Youth and Youth Adults.

A Prevention WINS coalition member also participated in the Town Hall Meeting and when I asked her what I should share with blog readers she said, "The calls to action that I heard were to regulate flavored tobacco products (grape blunts, chocolate mini-cigars), increase taxes to deter youth use, and for the FDA to continue to assert their authority."

"I think that coalition members should know that Seattle students have higher rates of alternative forms of tobacco than cigarettes.  That means more kids are using hookah or swisher sweets than smoking cigarettes.  We have done a great job educating folks about the dangers of cigarettes…so now kids just use the other products."

The Surgeon General's fact sheet ends with recommendations that can inform all substance abuse prevention activities.  She calls for "comprehensive, sustained, multi-component programs".

Posted by Inga Manskopf at 8:16 AM No comments:

Prescription drug abuse in the news 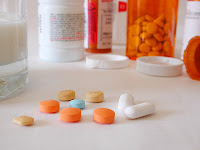 Over at Teenology 101, they discuss teen mental health, pain and prescription drug abuse.  They refer to a new study that shows that young people who take opiates like Oxycontin for chronic pain are more than twice as likely to become addicted to the drugs if they have a mental health condition

Sunday's New York Times included an article, Risky Rise of the Good-Grade Pill, about teenagers who abuse prescription medications meant to treat ADHD so that they may focus on studying to get good grades.  The Times' Room for Debate section features differing opinions about prescribing medications for ADHD and their link to drug abuse.

Over at the JoinTogether blog, a Congressman from Kentucky writes about his efforts to prevent prescription drug abuse.

Locally, the Take Back Your Meds campaign continues to advocate for a statewide medicine return program.
Posted by Inga Manskopf at 8:49 AM No comments:

On Thursday, the US Surgeon General, Dr. Regina Benjamin, as well as health experts and advocates from the Pacific Northwest and around the country, will be in Seattle for a Youth and Tobacco Town Hall Meeting.

The morning part of the day-long program will be webcast on June 14, 2012, 9:00 – 11:45 a.m., from the University of Washington.  To participate via live Web streaming, select this link at the time of the webcast:  http://www.uwtv.org/webcast/youthandtobacco/.  The public is also invited to provide comments via Twitter, using the hashtag: #PNWtobacco.

Complete information about the full-day’s program and agenda is available online.
Posted by Inga Manskopf at 1:51 PM No comments:


This month's Seattle's Child includes a heart-wrenching reminder of why Prevention WINS and other community coalitions are doing what we do.  Anna's Lessons is the story of a former NE Seattle student who was in a terrible drunk-driving accident last year.  This is a powerful "must read" for parents of middle and high school students.

Posted by Inga Manskopf at 2:57 PM No comments:


For some health problems, including alcohol misuse and dependence, more than 50% of the first diagnoses are by age 25.  In other words, underage drinking can be a precursor for adult problem drinking.  Healthcare specifically for adolescents, including substance abuse prevention, can play an important role in reducing adult health problems.

From an article appearing in The Atlantic about adolescent health:
Improving the health of adolescents worldwide is the surest route to better health globally, a new study has found. Unfortunately, according to a series in The Lancet, the health status of this age group has not improved as much over the past 50 years as that of children under 10 years of age.


Because of longer periods of time spent in school, delayed marriage, and a new understanding of how long it takes for the brain to fully mature, the period of adolescence has come to be viewed as extending from age 10 to 24 years of age, not from 13 to 18 or 19 as most assume.


As a group, teens are more frequently exposed to, or participate in, risky behaviors such as alcohol consumption and illegal drug use, and have sex with more casual partners than previous generations. They also face new challenges, such as social media.


In addition, adolescents are more predisposed than adults to what are dubbed "hot cognitions," meaning they are more affected than adults by exciting or stressful situations when making decisions. These hot cognitions may be associated with increased activity in the nucleus accumbens, a reward and pleasure center in the brain.

The study appears in the online version of The Lancet.
Posted by Inga Manskopf at 12:26 PM No comments:

Over at the Alcohol Justice website, they have posted three new reports that shine a not-so-nice light on alcohol marketing practices.

"Drink Responsibly" an Ineffective Message
Another report, How Big Alcohol Abuses "Drink Responsibly" to Market Its Products, debunks the effectiveness of the alcohol industry's "Drink Responsibly" message.  The report emphasizes that the message does not reduce alcohol-related harm.  Yet alcohol corporations continue to tout this voluntary message as a useful public health measure.

Alcohol Control States Have Lower Alcohol-Related Fatalities
Alcohol Justice also has a link to another new report to support what Washington substance abuse prevention advocates have been saying for the past few years: states with more control of the sale and distribution of alcohol have fewer alcohol-related traffic fatalities than states with no such controls.  Unfortunately, this additional support for Washington public safety advocates has come a little too late.
Posted by Inga Manskopf at 3:12 PM No comments:

What is the role of public policy in public health and safety?

What a week to contemplate the role of public policy and the regulation of beverages, foods and other substances that have an affect on health!

First, on Friday our state ushered in a new era of private liquor sales, making it available in every gocery store, drug store, and big-box store that is at least 10,000 square feet -- which, in NE Seattle, is virtually every one.  Limiting alcohol availablity is one proven method for preventing underage drinking and excessive alcohol consumption.  Last year, Washingtonians decided that public health and safety risks were worth the convenience of easily accessible liquor.

Many of the media stories about our new privatized system focus on the new taxes levied on liquor.  From a youth substance abuse prevention standpoint, these taxes are good.  Increasing taxes on alcohol is a proven method for reducing underage drinking rates.

Today, Californians are voting on a proposition that would raise taxes on every pack of cigarettes by $1.00, yielding an estimated $735 million a year for the state. Tobacco taxes are a proven method for reducing youth tobacco use.

In New York City, their mayor is pushing to ban the sale of large sodas and other sugary drinks at restaurants, movie theaters and street carts.  A debate appearing in the New York Times, What's the Best Way to Break Society's Bad Habits?, includes a piece written by Daniel Okrent, the author of Last Call: The Rise and Fall of Prohibition.  In it he writes that Prohibition failed . . . "because you cannot successfully legislate human desire . . . if people really want to do something, and there isn't an immediate and universally acknowledged victim, they will find their way to do it, irrespective of laws and regulations."

While human desire may not be legislated, a balance needs to be found between human desire and public health costs.  When it comes to unhealthy habits, including underage drinking and excessive alcohol consumption (and I venture to guess many health advocates would include the excessive consumption of sugary drinks and the use of tobacco), there are universally acknowledged victims.  Laws and regulations are essential for keeping "human desire" in check so that it doesn't create harms including health care costs related to disease, injuries, accidents, and other consequences of unhealthy behaviors.

What often does not appear in media stories about Prohibition is what Mr. Okrent told a reporter in 2010 about one positive outcome of Prohibition:

" . . . one of the very few positive consequences of Prohibition was the reduction in drinking. There was a very steep reduction immediately after it went into effect, but even the ensuing years of speakeasies, bathtub gin, cross-border smuggling, and every other manner of law-breaking did not bring drinking back to pre-Prohibition levels. At the end of Prohibition, Americans were consuming approximately 70 percent as much alcohol as they had in 1914.

In fact, it wasn’t until 1973 that we returned to pre-Prohibition levels of alcohol consumption, and only a few years later the per capita consumption figure began to decline again. Even now, we’re only inching our way back to the 1914 high-water mark.

One figure we’ll never reach again: the 7.5 gallons of absolute alcohol the average American drank in 1830 – the equivalent of 90 fifths of 80-proof liquor, or nearly three times as much as we consume today."

Don't get me wrong -- I do not think that we should go back to the days of outlawing alcohol use.  However, I think his statement points to the need for a debate that includes all of the facts.  We've heard plenty about how Prohibition failed, we need to hear more about how Prohibition and other policies may have created change for the good.

The New York Times introduces their debate about sugary drinks by asking, "But is the government's role to change people's behaviors and make them live healther lives?  And if so, what's the most effective way to do so?"  It's an important debate that couldn't be more timely.
Posted by Inga Manskopf at 2:58 PM No comments:


For children to do well in school, succeed in life, and remain addiction free, parents need to be well-trained in bonding, setting boundaries, and monitoring kids’ activities.  Kids need to learn skills to help them make healthy decisions in the face of peer pressure, media influences, and easy access to drugs. But where can parents and kids learn these skills?

During this webinar, parents will be given seven specific skills that include communicating politely, establishing rules and routines for youth success, and using positive discipline.  Parents will learn how they can prevent underage drinking and other substance abuse in their family.

Posted by Inga Manskopf at 9:16 AM No comments: