How parents can prevent teen marijuana & alcohol use

Posted by Inga Manskopf at 2:50 PM No comments:

From Parents advised to talk to teens about new marijuana law (HeraldNet):

Parents need to have clear rules that kids understand about drug and alcohol use, Walker said. "It's OK to say zero tolerance; we don't accept you using alcohol or drugs."Some parents feel uncomfortable adopting such household rules, she said, recalling that they didn't follow this advice regarding marijuana when they were younger.The strains of marijuana now available are much stronger than in the past, she said. Kids can have anxiety or panic attacks after ingesting edibles, or food infused with marijuana, she said.There's no way to know which kid will experiment with marijuana just one time and who will struggle with life-long dependence, Walker said."If they try it as adults, they're less likely to be dependent on it," she said.
Posted by Inga Manskopf at 10:11 AM No comments:

Make your voice heard in Olympia on Prevention Policy Day! 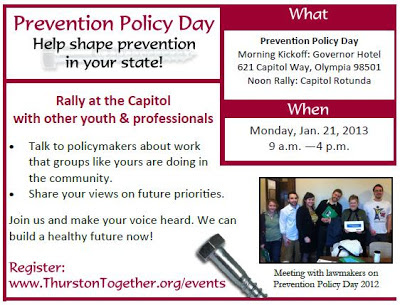 Posted by Inga Manskopf at 2:18 PM No comments:


Recent anecdotal reports from school districts suggest an increase in marijuana possession and consumption among young people, especially after the passage of Initiative 502, which legalizes small quantities of the drug for people age 21 and older. Below is a statement from State Superintendent Randy Dorn on what the law means to public schools.

The passage of I-502 changes nothing in public schools in Washington state. Certain drugs, including marijuana, continue to be illegal on school property and to anyone younger than 21 years old.

To receive federal funds, districts must abide by the Safe and Drug-Free Schools and Communities Act and must have a Drug and Tobacco-Free Workplace and a similar student policy in place. Each district’s policy has a number of common requirements about marijuana and other drugs, such as not allowing any student to:

Any student caught will be disciplined according to local district policy and local law enforcement as required. Fines can also be doubled if the arrest occurs within 1,000 feet of a school facility.

I-502 changes state law but has no effect on federal law.

Students need to be engaged and prepared for school. Marijuana doesn’t allow them to be either of those things. Marijuana dulls the brain. It can lead to paranoia, short-term memory loss and depression.

And for those under 21, it is illegal.
Posted by Inga Manskopf at 12:03 PM No comments:

What parents can say to their children about marijuana

Marijuana becomes legal in Washington state on Thursday, and a commercial marijuana market is on the horizon. Dr. Leslie Walker, chief of adolescent medicine at Seattle Children’s Hospital and president elect for the Society for Adolescent Health and Medicine, says that now’s the time for parents to talk with their children – especially teens – about the consequences of marijuana use.


“High school students who smoke marijuana report that they started between the ages of 13 -14,” says Dr. Walker, “So conversations need to start early.”

Read more at the Teenology blog.

Posted by Inga Manskopf at 3:04 PM No comments:

ADHD drugs misused by some students to help them study

Seattle Seahawks cornerbacks Brandon Browner and Richard Sherman face four-game suspensions for reportedly testing positive for Adderall, in violation of the NFL's ban on performance enhancing drugs. The news sparked conversation about the popularity of the drug from professional sports to high schools. Adderall is commonly prescribed for people with Attention Deficit Hyperactivity Disorder (ADHD), to help them focus.  It's been misused and abused by everyone from students looking to intensely focus as they study for exams, to professional athletes looking for an extra "edge" on the field.


Posted by Inga Manskopf at 1:23 PM No comments: