How can a community reduce underage drinking rates? 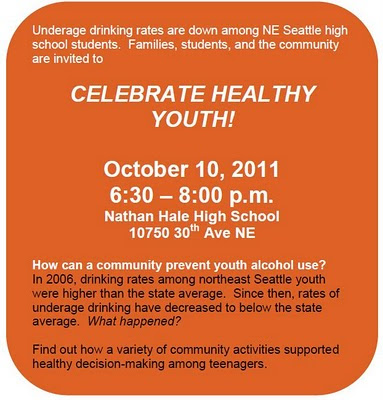 The October edition of National Geographic magazine contains a fascinating article about the teenage brain.  For those of us who are working to prevent youth substance abuse and/or for those of us who have teenage children, the following paragraph reminds us of the importance of parenting.

Yet we [parents] can and do help. We can ward off some of the world's worst hazards and nudge adolescents toward appropriate responses to the rest. Studies show that when parents engage and guide their teens with a light but steady hand, staying connected but allowing independence, their kids generally do much better in life. Adolescents want to learn primarily, but not entirely, from their friends. At some level and at some times (and it's the parent's job to spot when), the teen recognizes that the parent can offer certain kernels of wisdom—knowledge valued not because it comes from parental authority but because it comes from the parent's own struggles to learn how the world turns. The teen rightly perceives that she must understand not just her parents' world but also the one she is entering. Yet if allowed to, she can appreciate that her parents once faced the same problems and may remember a few things worth knowing.
Posted by Inga Manskopf at 12:43 PM No comments:

Recently, the 911 Good Samaritan Law was passed in Washington, providing legal immunity to people who call for medical assistance for drug users who overdose.

If you think you're witnessing a drug overdose and seek medical help, call 911.  If you are in possession of drugs at the time that you call, you will receive immunity from criminal charges of drug possession. The overdose victim you're helping is protected, too.

More Washingtonians die every year from overdoses than from car crashes. Most drug overdoses involve a prescription medication used with other drugs or alcohol. Most of these deaths can be prevented with fast medical help.
Posted by Inga Manskopf at 1:52 PM No comments:

During last week's general coalition meeting, a few people asked for the link to the recently broadcast webcast, The Blunt Truth: Communities Dealing with Marijuana.  It is available "on demand" through the CADCA website.

One of the panelists is Jim Cooper, the president of the Washington Association for Substance Abuse and Violence Prevention (WASAVP).  One of the goals of WASAVP is to increase awareness about how marijuana policy effects use among youth.
Posted by Inga Manskopf at 7:43 AM No comments:

In partnership with Seattle Children’s Hospital, Prevention WINS was awarded a grant from the American Medical Association (AMA) Foundation’s Healthy Living Program.  The $5,000 grant will be used to expand the Prevention WINS social marketing campaign and parent education program for Eckstein Middle School families. The project’s goal is to provide parents with the support they need to prevent substance abuse, including prescription drug abuse, among their children.

The AMA Foundation's Healthy Living Program addresses critical healthy lifestyle issues by providing mini-grants to grassroots community organizations.  This year, the foundation is funding projects targeting youth and addressing the topics of nutrition and physical fitness, prescription drug safety and violence prevention. Prevention WINS is one of 37 nonprofits across the country that received this grant this year.
Posted by Inga Manskopf at 3:11 PM No comments:

Community Anti-Drug Coalitions of America (CADCA) is asking substance abuse prevention advocates to help them ensure that the Congressional “super committee,” charged with determining $1.5 million in federal budget cuts by November 23, does not cut funding for the Drug Free Communities (DFC) program for FY 2012.

The super committee is made up of 12 Congressional members, one of which is Senator Patty Murray. As a result, Senator Murray has a significant say in the final recommendations concerning what should be cut. CADCA is asking people to sign a letter to Senator Murray that outlines the DFC program's successes and makes the case to continue funding for the program.  Prevention WINS is funded by a DFC grant.

For more information about the letter and how to sign on to it, contact CADCA's Director of Public Policy by September 12.
Posted by Inga Manskopf at 8:56 AM No comments:

Yesterday, the recipients of the 2011 Drug Free Communities (DFC) continuation, mentoring, and new grants were announced.

Across the country, 87 new grants were awarded which brings the total of DFC grants awarded for 2011 to 694, including continuation grants.
Posted by Inga Manskopf at 8:32 AM No comments: