From the Seattle Police Department:

On Saturday, April 30 from 10 a.m. to 2 p.m. the Seattle Police Department and the Drug Enforcement Administration (DEA) will give the public its 11th opportunity in six years to prevent pill abuse and theft by ridding their homes of potentially dangerous expired, unused, and unwanted prescription drugs. Bring your pills for disposal to any of the city’s five precincts. You can find the drop-off site in your neighborhood by visiting our precinct map.    The service is free and anonymous, no questions asked.

Last September, Americans turned in 350 tons (over 702,000 pounds) of prescription drugs at more than 5,000 sites operated by the DEA and more than 3,800 of its state and local law enforcement partners. Overall, in its 10 previous Take Back events, DEA and its partners have taken in over 5.5 million pounds—more than 2,750 tons—of pills.

This initiative addresses a vital public safety and public health issue. Medicines that languish in home cabinets are highly susceptible to diversion, misuse, and abuse. Rates of prescription drug abuse in the U.S. are alarmingly high, as are the number of accidental poisonings and overdoses due to these drugs.  Studies show that a majority of abused prescription drugs are obtained from family and friends, including from the home medicine cabinet. In addition, Americans are now advised that their usual methods for disposing of unused medicines—flushing them down the toilet or throwing them in the trash—both pose potential safety and health hazards.

Posted by Inga Manskopf at 4:01 PM No comments:

Recent SPD Blotter reports remind us why substance use prevention needs to start early and take a comprehensive approach.

On Wednesday, April 13, the Blotter reported that an "18-year-old woman's mother called 911 . . . and reported her daughter overdosing at her home near NE 50th Street and Sand Point Way NE."

On Monday, April 18, the Blotter reported that bike officers "responded to the Westlake Mall at about 6:30 PM Sunday after a witness found a 21-year-old woman unresponsive in a third-floor bathroom . . . strewn with a half-dozen needles and a heroin cooker."


Luckily, both times first responders were able to revive the young women. Both provide good examples of how policies that encourage people to call 911 if they witness an overdose and enable first responders to carry Narcan/Naloxone can save people's lives.

On Saturday, April 23, the Blotter reported that a 22 year old man "believed to be high on methamphetamine and PCP smashed a downtown Ballard window during the afternoon lunch hour and attacked customers with a shard of glass . . ."

Considering the ages of the people involved in these incidents, they provide good examples of why a well-funded, multi-pronged approach to prevention is important. Preventing drug use among teenagers can prevent drug overdoses and criminal behavior among young adults.

Reducing access to drugs
But school-based prevention programs and supporting parenting activities proven to prevent drug use is not enough. This is especially true if drugs are readily available in a community, like heroin is now. To effectively prevent youth drug use and later abuse, policies that reduce access to drugs need to be adopted and enforced. As with the reduction of drug-related deaths, policies play a key role in a comprehensive prevention strategy.
Posted by Inga Manskopf at 1:55 PM No comments:

Governor Jay Inslee proclaimed today, April 20, 2016, as "Talk With Your Kids About NOT Using Marijuana Day". 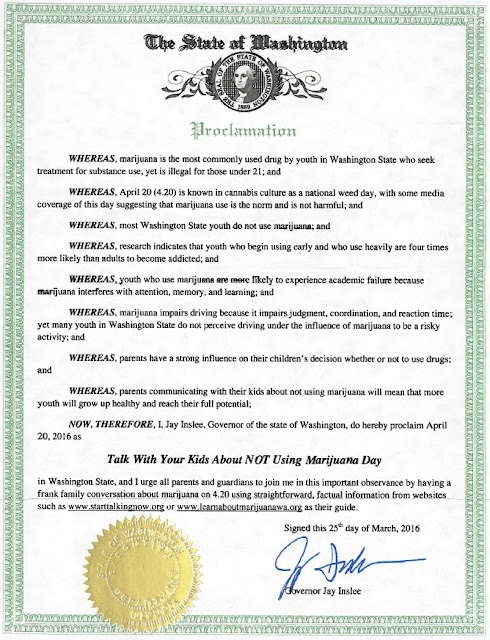 Parents have the greatest influence on a child's decision about drugs, including marijuana and alcohol. In fact, teens who learn about the risks from their parents are 50% less likely to use drugs than kids who do not.

Everyone has a role to play: "Talk. They Hear You" campaign materials can help


April is Alcohol Awareness Month, a great opportunity to learn more about preventing underage drinking. The "Talk. They Hear You." campaign from the Substance Abuse and Mental Health Services Administration provides many resources for community members to use in prevention activities.

Posted by Inga Manskopf at 10:00 AM No comments:

Seattle Magazine: What's being done about the rise in marijuana use among teens?

"What's being done about the rise in marijuana use among teens?" asks an article in this month's Seattle Magazine. The article features interviews with Prevention WINS current and former members. Here are a few excerpts:

Local kids are being pummeled with messages that pot is now OK, says longtime KING-TV reporter Roberta Romero, now director of development at Residence XII, a substance abuse program for women based in Kirkland. Romero, in recovery for alcohol addiction herself and the parent of twin teenagers attending Seattle’s Roosevelt High School, worries that the recent years’ barrage of local pot promotion isn’t being offset by prevention education for youth.

But increasing availability for adults also means that youth are likely to have more access to pot. According to the state’s most recent Healthy Youth Survey, 10th graders who live with a marijuana user are more than five times as likely to report regular pot use. When kids ingest or smoke pot, it can lead to a slew of health-related issues, says Leslie R. Walker, M.D., the chief of Seattle Children’s Division of Adolescent Medicine.


Although hundreds of Seattle students were caught using or possessing marijuana last year, Seattle Public Schools has not made broad changes to student programming or curriculum to address Washington’s new legal environment for marijuana. However, the district has incorporated information on the risk of new marijuana products into existing curriculum, says Lisa Davidson, manager of prevention and intervention for Seattle Public Schools. Evidence-based drug prevention programs used by the district include the Project Alert program, used in many middle schools, and Project SUCCESS, in high schools. There’s also more staff training and parent education pertaining to issues such as the marijuana law and new products, she says.

In prevention circles, “perception of harm,” or the idea that a substance is harmful, is a key indicator. “As perceptions of harm around a substance go down, we see the use go up,” says Liz Wilhelm, drug-free communities coordinator for Prevention WINS.
Posted by Inga Manskopf at 2:55 PM No comments: