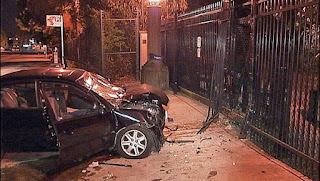 In April, Prevention WINS and Seattle Children's Hospital Division of Adolescent Medicine hosted a movie night featuring a new video produced by Prevention WINS coalition members.  The video is now posted to the Prevention WINS website for all to see: www.preventionworksinseattle.org.

While parents can have the most influence on the choices their teenage children make, the most effective way to prevent underage drinking and youth substance use is for the whole community to be involved.  Schools, law enforcement, healthcare organizations, youth-serving organizations, religious organizations, businesses, and youth themselves are just some of the community members that have roles to play.  Learn more at the Prevention WINS website.

Photos thanks to KIRO-TV.
Posted by Inga Manskopf at 8:59 AM No comments:

The Liquor Control Board (LCB) released the initial draft rules for I-502 implementation. These rules reflect the Board’s stated goal of developing a tightly regulated and controlled market, and also demonstrate the agency’s initial thinking on what Washington’s system of growing, processing and retailing will look like. The Board is concerned with out-of-state diversion of product, traceability of products, responsible business practices, youth access and other public and consumer safety issues.

Initial draft rules may be downloaded at: https://lcb.box.com/initial-draft-rules.

By releasing these initial draft rules before filing the formal draft rules the LCB is soliciting public comment before starting the official draft rule process in mid-June. Vetting these rules with stakeholders allows the LCB to adapt and improve them. These draft rules will benefit from community input, alternatives and adjustments so please review closely and send suggestions to the below contact points no later than June 10, 2013.

The best way to provide your input is via email at: rules@liq.wa.gov.

This week is National Prevention Week and today's focus is on preventing prescription drug abuse.

Prescription drug abuse is the nation's fastest growing drug problem and it's no different here in NE Seattle.  According to the Washington State Healthy Youth Survey, current use of prescription painkillers for non-medical purposes has steadily increased among NE Seattle middle and high school students over the past few years.

Access
Like alcohol and marijuana, NE Seattle high school students who abuse prescription painkillers get them socially. Overwhelmingly they say that they get painkillers they abuse "from a friend." One original source is likely someone's medicine cabinet. Everyone should be encouraged to lock up their medications and safely dispose of left-over medications to reduce youth access to them.

The King County Board of Health is accepting comments from the public about the need for such a program. People may submit comments in writing or in person during Thursday's Board of Health public hearing on the issue.
Posted by Inga Manskopf at 10:08 AM No comments: 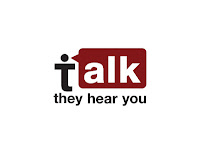 "Talk, they hear you" is a new underage drinking prevention campaign from the Substance Abuse and Mental Health Services Administration (SAMHSA).  The campaign provides parents of children ages 9 to 15 with the tools and information they need to start talking with their children early about the dangers of alcohol. SAMHSA provides communities with a suite of materials that helps reinforce the underage drinking prevention campaign’s messages.  Materials include TV, radio, and print PSA's, web banners and buttons that anyone can add to their website, and customizable posters.

Here is one of the television public service announcements that is available on YoutTube:


Here are two of the print PSA's: 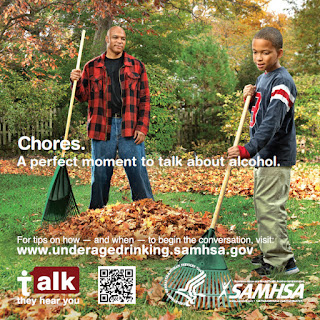 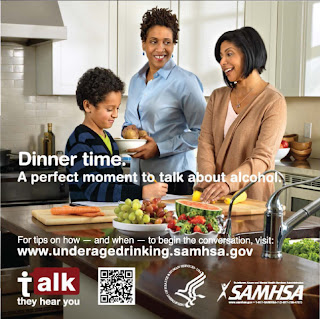 The Parent Resources section includes flyers such as:
Since youth substance use, including alcohol use, is a community problem that requires a community-wide solution, the campaign includes resources for partners.  Partner Toolkit  includes a sample proclamation, sample social media posts, newsletter articles, and talking points.
Posted by Inga Manskopf at 9:24 AM 1 comment:

From a recent JoinTogether commentary:

This distinction is important because it tells us that doing something about substance use is a viable option for improving academic performance. Because we know that almost one-quarter of students will eventually drop out of high school, we need to add drug prevention and intervention to the list of things we can do to solve the nation’s dropout crisis.

Earlier this year, the Institute for Behavior and Health, Inc. released a report about the connection between adolescent substance use and the risk for dropout in the U.S.  The following conclusions were made:

• There is general agreement about the biological, social, and environmental mechanisms that explain the link between substance use, academic failure, and dropout.

• Adolescents who are at risk for academic failure or have dropped out of school are likely to have substance use problems in combination with an array of other problem behaviors that, if not addressed, place them at extremely high risk for costly long-term adversity, including unemployment, crime, and poor health.

• Of all the problems that contribute to dropping out, substance use is one of the easiest to identify and one of the most easily stopped by interventions including treatment.

The report is available at: http://preventteendruguse.org/pdfs/AmerDropoutCrisis.pdf.
Posted by Inga Manskopf at 2:46 PM No comments:

Youth marijuana use rates up in North Seattle

On April 26 I posted information about a man who was arrested for selling pot brownies to Ballard middle and high school students.  Yesterday, Q13-FOX reported that marijuana use rates are up at Ballard High School and are above the state average.

Like Ballard, youth marijuana use rates increased in NE Seattle and 10th grade use rates at Nathan Hale and Roosevelt High Schools are also above the state average.

Next week is National Prevention Week

SAMHSA also launched a new social media page, which features messages that can be posted on Facebook, Twitter, or other social media platforms, and a promotional materials page which includes downloadable graphics to be used in social media posts and event materials.
Posted by Inga Manskopf at 3:19 PM No comments:

Why is a medicine return program needed in King County?


First some background information about the problem of prescription drug abuse. 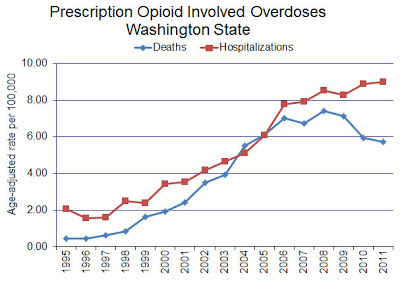 CDC says the problem is epidemic
This is a national problem, as well.  According to the Office of National Drug Control Policy (ONDCP):

The Centers for Disease Control and Prevention has classified prescription drug abuse as an epidemic. While there has been a marked decrease in the use of some illegal drugs like cocaine, data from the National Survey on Drug Use and Health (NSDUH) show that nearly one-third of people aged 12 and over who used drugs for the first time in 2009 began by using a prescription drug non-medically.

Some individuals who misuse prescription drugs, particularly teens, believe these substances are safer than illicit drugs because they are prescribed by a healthcare professional and dispensed by a pharmacist. Addressing the prescription drug abuse epidemic is not only a top priority for public health, it will also help build stronger communities and allow those with substance abuse disorders to lead healthier, more productive lives.

2. Monitoring. Implement prescription drug monitoring programs (PDMPs) in every state to reduce “doctor shopping” and diversion, and enhance PDMPs to make sure they can share data across states and are used by healthcare providers.

Are these things going on locally?
In King County, the first three strategies are in place either through local community activities or the implementation of the prescription monitoring program in our state.

An ongoing medication disposal program. But King County can change that.

On May 16, the King County Board of Health is holding a public hearing about proposed policy to start a permanent medicine return program countywide.  See yesterday's post for more information.
Posted by Inga Manskopf at 11:04 AM No comments: 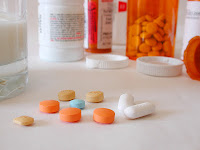 Your voice is needed!

Background
In 2012, the King County Board of Health established a subcommittee to explore how it can support the safe disposal of unused and unwanted medications. With prescription drug abuse and accidental poisonings on the rise in King County, an ongoing, county-wide medicine return program funded by producers is part of a comprehensive prevention strategy.

What is being proposed?
The Board of Health subcommittee is proposing that the producers of medicines fund and implement a county-wide secure medicine return program at pharmacies and law enforcement agencies using a product stewardship model. A product stewardship model recognizes that everyone involved in the lifespan of medications has a responsibility to reduce its health and safety impacts. For producers, this includes planning and paying for the disposal of medicines at the end of their useful life.

What is this public hearing all about?
During the May 16, 2013 Board of Health meeting, individuals are encouraged to provide 2-minute testimony about the subcommittee’s proposal to establish a permanent medicine return program. The hearing will provide Board of Health members with information about why such a program is important for reducing youth prescription drug abuse and accidental poisonings.

How can I testify?
Show up at the Board of Health meeting on May 16 and sign in as a speaker. Individuals and organizations in favor of the proposed policy are coordinating so that we may take full advantage of the limited time each speaker has.

Why is a take-back program needed?
Visit the King County Take Back Your Meds coalition webpage for information about the prescription drug abuse problem and the need for a comprehensive prevention strategy including a permanent medicine take back program.
Posted by Inga Manskopf at 11:05 AM No comments:

Free webinar: The role of the justice system in preventing underage drinking

Free Webinar: Enforcing the Underage Drinking Laws: Accountability and the Role of the Justice System

What: In this webinar, national experts will discuss the importance of justice system involvement in preventing underage drinking and alcohol’s negative impact on our nation’s youth and public health and safety in general; the crucial role enforcement agencies play in preventing underage drinking; and the role of media and policy advocacy in ensuring that collaborative efforts are successful in moving effective strategies forward. Following their presentations, panelists will engage with participants in a live question-and-answer period.

To find more information and to register, please visit www.stopalcoholabuse.gov.

Posted by Inga Manskopf at 9:57 AM No comments:

Marijuana and alcohol theft not uncommon in Seattle

On Friday, I posted information about North Seattle crime related to marijuana, including the sale of pot brownies to middle and high school students.  Yesterday, the Seattle Police Department shared information about recent robberies at North Seattle marijuana dispensaries.  Apparently, during one of the robberies in NE Seattle pot cookies were among the items stolen.

Marijuana is not the only drug targeted by thieves.  Theft of hard alcohol has been a problem since the approval of I-1183, the initiative that privatized the sale of hard alcohol, the Prevention WINS coalition learned during a recent general meeting.  Unless the items stolen value at least $1,000, the King County Prosecutor's Office generally does not prosecute offenders.  Both the Seattle Weekly and the West Seattle Herald reported on alcohol thefts recently.

As the Seattle Weekly notes, youth who are caught with alcohol (minor in possession) generally are not charged with a crime but are referred to the King County diversion program.
Posted by Inga Manskopf at 8:59 AM No comments: