Yesterday, the City of Seattle Department of Planning and Development released an updated map that shows where they currently think that marijuana businesses could be located in the City.  The map takes into consideration proposed Liquor Control Board rules and the proposed City of Seattle land use ordinance.

In their latest set of proposed rules, the Liquor Control Board (LCB) changed the definition of the 1,000 foot buffer between marijuana businesses and schools, playgrounds, and other places frequented by children.  Marijuana business interests lobbied for the change stating that the original definition limited possible business locations too much.

Here is what the NE Seattle section of the City's map looks like: 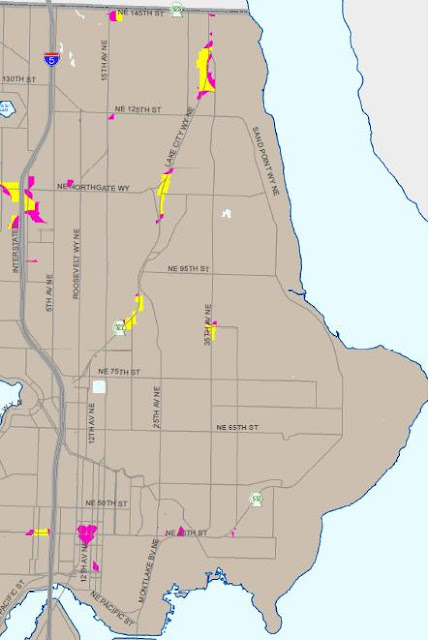 In the map above, the yellow areas indicate places where marijuana businesses may be located using the initial definition (as the crow flies) of the 1,000 foot buffer.

The pink areas indicate the additional land that would be acceptable for marijuana businesses under the LCB's newly proposed definition: "along the most direct route over or across established public walks, streets, or other public passageway between the proposed building/business locations to the perimeter of the grounds of the entities listed."

Since the LCB and the City of Seattle have yet to adopt their proposed policies, this map is not to be considered a final representation of where marijuana businesses will be located.

Update: It turns out the the pink areas will not be considered for marijuana businesses.  On September 13 the LCB released the following statement:

The Washington State Liquor Control Board (WSLCB) announced today that it will file an emergency rule on October 16, 2013, to make a single technical revision to the recreational marijuana rules. The emergency rule will revise the method of measurement of the 1,000 foot buffer measurement between a licensed marijuana business and an elementary or secondary school, playground, recreation center or facility, child care center, public park, public transit center, library, or arcade where admission is not restricted to those age 21 and older. The emergency rule will not affect the Initiative 502 implementation timeline.

The current proposed rules filed with the Code Reviser on September 4, 2013, state “the distance shall be measured along the most direct route over or across established public walks, streets, or other public passageway between the proposed building/business location to the perimeter of the grounds.”

“The current measurement mirrors the existing method of measurement between liquor-licensed businesses and schools,” said agency director Rick Garza. “We’ve since learned that this measurement, as it pertains to marijuana, conflicts with federal law. Although the emergency rule won’t be filed until October 16, it is critical that we announce our intentions now so that potential licensees, local government and law enforcement will have clarity and predictability going forward.”
Posted by Inga Manskopf at 10:48 AM