How many marijuana stores will be located in Seattle and King County?

The Washington State Liquor Control Board (LCB) today approved the filing of proposed supplemental rules that, if ultimately enacted, will help govern Washington State’s system of producing, processing and retailing recreational marijuana. The LCB earlier this summer filed proposed rules and chose to revise them after receiving public input.

In addition to the rules, the LCB released information about how many marijuana stores will be allowed to open in every county.  Here is a list of King County jurisdictions and the number of proposed marijuana stores in each one. 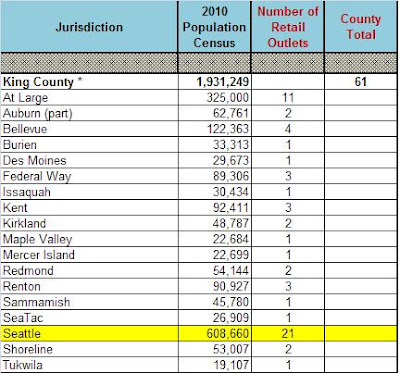 The LCB would like your input on the proposed rules to implement Initiative 502.  Please send your initial comments to the LCB by October 4, 2013 at:

Public hearing will be held on October 8 and 9 -- details to be posted on their website: www.liq.wa.gov
Posted by Inga Manskopf at 1:03 PM