Between 2005 and 2011, high school seniors nationwide reported the following rates of binge drinking within the last two weeks:


Authors of the study, published in the Journal of the American Medical Association this week, call consuming more than 10 alcoholic drinks “extreme binge drinking”.  The number of seniors engaging in the most extreme drinking "is really concerning because they're most at risk for the really severe consequences," including reckless driving, car accidents and alcohol poisoning," said lead researcher Megan Patrick of the University of Michigan's Institute for Social Research.

The study is important because it provides insight into seemingly conflicting trends:  that reported levels of binge drinking – traditionally defined as having five or more drinks in a row – have been declining among adolescents, although medical emergencies involving teen alcohol use have not.

Heavy drinking locally
While the WA Healthy Youth Survey (HYS) does not measure binge drinking like this recent study does, it does collect data about heavy use.

Below are two charts from the 2012 HYS showing the rates of drinking among Nathan Hale High School and Roosevelt High School students (in blue) compared to the state average (in green).  As you see, most students do not drink (the lightest shaded areas in the columns).  However, most of those who do drink use alcohol often and/or heavily.

The darkest colors at the bottom of the columns show the rate of "heavy drinking" -- 6+ days of drinking in the past month and/or 2+ episodes of binge drinking (5 or more drinks at one time).

The next shade lighter shows the rate of "problem drinking" -- 3 to 5 days of drinking in the past month and/or 1 day of binge drinking. 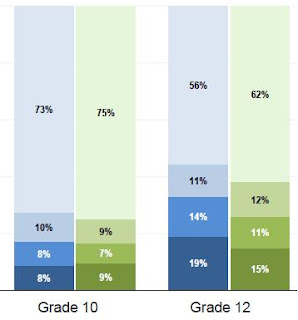 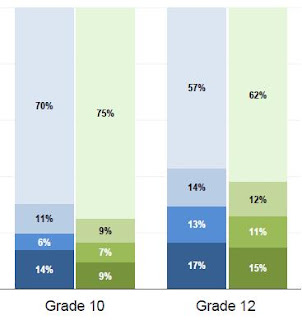 These charts are available on the Prevention WINS website under 2012 Healthy Youth Survey Results, high school summaries.
Posted by Inga Manskopf at 1:35 PM