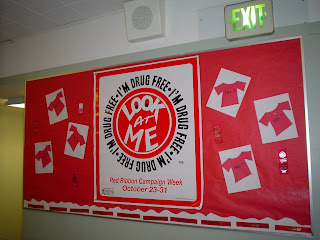 The Red Ribbon Campaign is now the oldest and largest drug prevention program in the nation reaching millions of young people during Red Ribbon Week, October 23-October 31 each year. By participating in community anti-drug events, young people pledge to live a drug-free life and pay tribute to DEA Special Agent Enriqué “Kiki” Camarena. Special Agent Camarena was an 11-year veteran of the DEA assigned to the Guadalajara, Mexico, office where he was on the trail of the country’s biggest marijuana and cocaine traffickers. In 1985, he was extremely close to unlocking a multi-billion dollar drug pipeline. On February 7, 1985, he was kidnapped, brutally tortured, and murdered by Mexican drug traffickers. His tragic death opened the eyes of many Americans to the dangers of drugs. In 1988, Red Ribbon Week was recognized nationally with President Ronald and First Lady Nancy Reagan serving as the Honorary Chairs.This year, we recognized Red Ribbon Week at Eckstein by challenging the students to wear red t-shirts on November 7th to show that they are drug free. At lunchtime, the students wearing red t’s were given lollipops with a drug free message on them. We also put up a ‘prevention’ table where Danielle Bock from Partners in Prevention had the Wheel of Misfortune and Lisa Sharp, Seattle Schools Tobacco Specialist brought pigs lungs to show the dangers of smoking as well as drug/alcohol informational brochures and giveaways for the students. The table was packed with students all three lunches. Christine Talianis, Prevention Specialist also put up a bulletin board to advertise Red Ribbon Week. All in all, it was a fun activity.
Posted by Christine Talianis at 8:07 PM