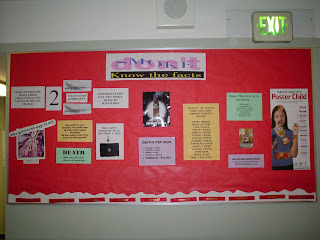 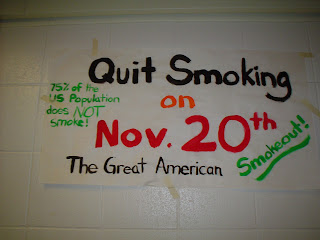 In 1977, the American Cancer Society launched the Great American Smokeout on the third Thursday in November. On this day every year, smokers across the country try to do what feels impossible — give up their cigarettes for 24 hours. The idea is that many will quit puffing away altogether.

It’s important that we do everything we can to prevent adolescents in our community from smoking. To address this issue at Nathan Hale High school, the prevention group, led by Amy Briggs and Christine Talianis, put up anti-tobacco posters and banners around the school. On November 20th the group members wore t-shirts with anti-tobacco messages on them as well as gave out anti-tobacco buttons and cards with the tobacco quit line phone number (1-800-QUIT NOW) to other students around the school. At lunch, Amy and Christine, armed with giant cigarettes, headed to the spot where students congregate at lunch and spread their anti-smoking message. The students were receptive and open to talking about quitting. At the moment, Christine and Lisa Sharp, Seattle Schools Tobacco Specialist, are facilitating a 6-week smoking cessation class for students who are ready to quit now. Looks like this lunch time activity might have brought in a few potential students for the next group.

At Eckstein Middle School, Christine also put up an anti-smoking bulletin board.

Posted by Christine Talianis at 6:58 PM