Alcohol energy drinks to be discontinued 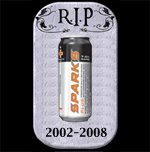 From the Marin Institute:

"In a major victory for public health and safety, MillerCoors has agreed to a landmark settlement with

13 state attorneys general and the city attorney of San Francisco, who were investigating the company over its alcoholic energy drink, Sparks. MillerCoors will stop producing and selling caffeinated beverages such as Sparks, a popular orange-flavored alcopop made with stimulants. MillerCoors also agreed to end misleading and youth-oriented marketing tactics. Combining caffeine with alcohol has been linked to various public-health risks, especially among underage drinkers. Last year, Marin Institute released the report, Alcohol, Energy Drinks, and Youth: A Dangerous Mix."

Washington State Attorney General Rob McKenna was among the attorneys general who asked MillerCoors to stop producing these alcoholic energy drinks. Earlier this year, Attorney General McKenna said, “Drinks like Sparks Red offer a witch’s brew of stimulants and alcohol, marketed in a way that is very appealing to young people. But MillerCoors can’t responsibly ignore the overwhelming evidence that this dangerous mix has a devastating impact on our youth.”
Posted by Inga Manskopf at 7:39 AM