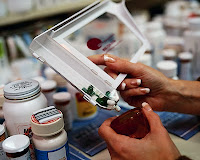 "The chance that a teenager or young adult will received a prescription for a controlled medication has nearly doubled in the last 15 years," according to a study summarized in an article in Reuters.
The article goes on to say, "In 2007, one of out every nine teens . . . received prescriptions for medication such as pain killers, sedatives and stimulants that could potentially be abused, the study, led by Robert Fortuna at the University of Rochester in New York, warned."
"While he told Reuters Health that this doesn't necessarily mean that teenagers and young adults will either abuse the medications or pass them onto others, it does reinforce the need to let people know how dangerous the drugs can be -- and the need to monitor their use."
Posted by Inga Manskopf at 2:50 PM