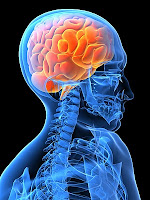 From National Public Radio: Teen Drinking May Cause Irreversible Brain Damage.
For teenagers, the effects of a drunken night out may linger long after the hangover wears off.
A recent study led by neuroscientist Susan Tapert of the University of California, San Diego compared the brain scans of teens who drink heavily with the scans of teens who don't.
Tapert's team found damaged nerve tissue in the brains of teens who drank. The researchers believe this damage negatively affects attentions span in boys, and girls ability to comprehend and interpret visual information.
"First of all, the adolescent brain is still undergoing several maturation processes that render it more vulnerable to some of the effects of substances," Tapert says.
In other words, key areas of the brain are still under construction during the adolescent years, and are more sensitive to the toxic effects of drugs and alcohol.
Posted by Inga Manskopf at 9:05 AM