One of the most exciting and important parts of the forum is Capitol Hill Day, when coalitions meet with their federal representatives. The Seattle delegation, including the Hale students, met with Representative Jim McDermott and his Chief of Staff, Mike DeCesare. We spoke about the drug and alcohol issues affecting our communities and how Rep. McDermott can best support our work. Here's a photo of our Hale group with Rep. McDermott: 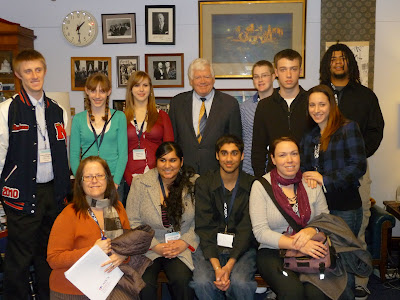 Among the topics we discussed is the need for continued federal funding of drug/alcohol prevention programs in Seattle. Many of our prevention programs, including coalitions, rely on funds from the Office of National Drug Control Policy and the Center for Substance Abuse Prevention.

The entire Washington State delegation (80+ of us!) met with Senators Patty Murray and Maria Cantwell, but I'll blog about that later.
Posted by Inga Manskopf at 3:03 PM